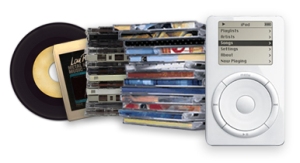 I recall when the first iPod came out in 2001.  It was revolutionary – 1000 songs on a portable and extremely attractive hard drive!   Less than two years after the release of the iPod, Apple launched the iTunes Store.   It was one thing to fit [a portion of] your CD collection onto an iPod, it was another to be faced with the reality that said CDs were no longer useful; one can simply purchase and download digital files which would be synced up with your iPod in minutes.  One need not drive to the record store only to find out that the record they intended to buy was no longer in stock (and would, say, Best Buy even carry a Danielson record?!).  Soon the iPod (or any MP3 player for that matter) would be easily adaptable to all settings: one’s car or one’s living room, through a portable stereo in the park or strapped to one’s arm during a workout.  The sale of CDs has steadily dropped since the introduction of the iPod and similar devices and CDs are quickly becoming a thing of the past.

Although I often despise the association, I am of the CD generation.  My family made excessive use of cassette tapes (especially my father’s Van Halen and Eric Clapton and my mother’s Fleetwood Mac and The Beach Boys), but CDs were around for four years before I was even born.  I remember my first two CDs: Weezer’s first self-titled record (aka The Blue Album) and Mellon Collie and the Infinite Sadness by The Smashing Pumpkins.   Since then, my collection has grown considerably.  Still, even with the hundreds of CDs I’ve collected over the last fifteen years, I can fit four times as many on my 120 GB iPod.  With services like iTunes, eMusic, Lala, Amazon, etc., complete MP3 albums can be downloaded for a fraction of the price of a new CD, and unless one has some high-end headphones or a high-end stereo system (a lot of $, £, €, ¥,…) the difference between a standard MPEG audio file (160 kbps) and a standard CD (1200 kbps) is rather unnoticeable.

With all of this technological allure some people are still unsettled by the change.   I myself prefer to have the album in my hands because I appreciate creative packaging design to a near-obsessive degree.  Any look inside a [post Pablo Honey] Radiohead album booklet would quickly convince one of the inferiority of an exclusively digital musical experience (even such an experience with a picture of an album cover on a computer screen).   And while we already have the platform for digital music (computers and MP3 players) couldn’t we save on so much physical consumption by switching exclusively to digital music?   Even when considering environmental issues like the possibility reducing the production of plastics and paper, I find this option difficult to stomach for the same reason that I find digital books difficult to stomach.   There’s something to having a physical CD/package and a physical book in one’s hand…or is there?

Mass production of recorded music didn’t exist until about a quarter of the way into the 20th century.   At that time the vinyl phonograph record was the standard and it could only play from two-to-three minutes of music per side.  By 1949, vinyl records were in 12-inch LP (45-minute long play) form.  This became the standard length of a record.  Eventually this was followed by the use of magnetic tape: the 8-track cassette in the late sixties and early seventies followed by the compact cassette, which could generally play up to 45 minutes of music.

In a recent interview with Paste, Sufjan Stevens expressed his own crisis with regard to this whole shift in the way we can experience music:

I’m wondering, why do people make albums anymore when we just download?  Why are songs like three or four minutes, and why are records 40 minutes long?  They’re based on the record, vinyl, the CD, and these forms are antiquated now.  So can’t an album be eternity, or can’t it be five minutes? … I no longer really have faith in the album anymore.  I no longer have faith in the song.

Perhaps we find ourselves in this crisis with Sufjan, but while he remains skeptical, I remain hopeful.  From 2006 to 2007, vinyl record sales jumped more than 85%, and from 2007 to 2008 vinyl record sales jumped another 89%.  Yes, collecting vinyl records is extremely trendy and hip at the moment, and yes, when these hipsters accidentally become parents or are forced into real life via some other circumstance they might realise that investing their money in vinyl records solely for the propagation of their hipster image is not very hip after all.  But I still believe that these market figures are indicative of a basic human need for ritual and tradition of some sort.

It is true that there is nothing particularly sacred about the length of an LP or a cassette or a CD, but does the freedom of the age of digital music distribution and consumption require that we abandon the [recent] traditions we’ve grown up with?   Just because the technology moves along and just because we move along with it doesn’t mean that we can’t slow down and savour the beauty and simplicity of the traditional way we experience recorded music, packaging included.  After all, music is art and art is aesthetic and aesthetic is beauty and beauty, as Kant has defined for us in the Third Moment of his Critique of the Power of Judgment, “is the form of the purposiveness of an object, insofar as it is perceived in it without representation of an end.”

I see great correlations between this issue, ritual, and Church tradition, but that’s for another post.