First they came for the Jesus People, and I did not speak out—because I was not a Jesus Person.

Then they came for the seeker-sensitive church, and I did not speak out—because I was seeker-insensitive.

Then they came for the emergents…or emerging, or whatever you call them, and I did not speak out—because I was not emergent/ing.

Then they came for the Hipster Christians and I was all “AW HELL NO BEEYATCHS!” in the most ironic tone possible.

SO, it has become impossible to ignore the phenomenon of “Hipster Christianity” that is sweeping through evangelicalism these days (blazing from the cover of my newest Christianity Today).  Or should I say the COMMENTARY on “Hipster Christianity” (I’m going to keep using those ironic quote marks because I think it is such a ridiculous term, I don’t want to give it the pleasure of legitimacy in the realm of English idioms).

A while back, an acquaintance sent me a Facebook invite to become a “fan” of a page that “he thought I’d like”:  “Hipster Christianity.”  I was like, wha?  I checked it out.  There was a link therein to a “quiz” that would tell you if you were a “Christian Hipster.”  I clicked on said link, visited linked website which included these photo shoots of types of “Christian Hipsters” and questions about which kind of books or films I liked, then saw that this was all a quasi-interactive marketing scheme for a book called “Hipster Christianity” and I got THE HELL out of there.

What kind of queer (in the classical sense, my dear gay friends) Christian publishing house marketing person came up with this idea?  “See if you’re ‘hip’—ironically laugh at the stereotypes—ponder the connection between faith and culture in your own disaffected and detached way—now go buy the effing book you little shit.”  If anyone had the slightest inclination to consider themselves “hip” wouldn’t they know that aligning yourself with something that identifies you as such (using a word that has scarcely BEEN “hip” since 1965) is the first sign that you have lost all possibility of truly being that very thing?  So basically they are trying to appeal to people who are either poseurs or those who cannot stand “Christian hipsters”?  I can only assume it was the former…(Which, of course, is not the reason which I MYSELF left the website—I simply cannot stand Christian marketing…of anything.)

So I did not become a fan of aforementioned FB page or aforereferenced book.  My reasoning was that I thought the book was playing to the movement of those who would want to become known as “Christian Hipsters.”  However, I later came across the book & decided to scan over the beginning, just to see how ridiculous it was.  Turns out, the book is kind of a CRITIQUE of this movement (is it really a movement?  Maybe a style, a flavor, an expression of some part of a movement?).  Anywho, a central question in the “introduction” (lower case “i” in the book) was “whether or not Christianity can be, should be, or is, in fact, cool.”  The author claims that his book is “not an advertisement or rallying cry for ‘hip Christianity’ (my quotes, not his), nor is it an outright chastisement.  It’s a critical analysis.  It’s about the contradictions inherent in the phenomenon of Christian cool and the questions Christians should be asking of themselves if they find themselves within this milieu.”

Before I rip a hole in this idea of “contradictions” between “Christian” and “cool,” we need to zero in on one little word, not central to his claim, but which undoes any credibility to his forthcoming argument:  “milieu.”  WHO USES THIS WORD outside of a grad-school thesis?  I mean, I read that and I’m thinking “Ahem, is the milieu you mention au courant vis-a-vis the locus of a bête-noire or an enfant terrible?”  Oops, I missed one pretentious term, but he picks it up a few lines later:  “it’s en vogue for Christians to hate on Christianity in all of its mainstream forms.”  (I’m sorry, is it outre to hate on the use of ostentatious language?)  Maybe that’s the way he talks, maybe it just popped out from Thesaurus.com the day he was writing (at “a table,” he somberly notes, “in the dining room of the Kilns—the home of C.S. Lewis.”  This is relevant…apropos of what?).  I’m sorry, but all of this is adding up to a sorry picture of our tour guide through the world of “Hipster Christianity.”  And this “authorial tone” is part of the thing that cuts the legs off of the central argument I see here against Christians who are “cool” (though I must say I AM glad he is not advocating the sense I first got from his book’s website).

He says that this whole phenomenon “boils down to one simple desire: the desire to make Christianity cool.”  But his definition of “cool” seems to reveal more about his own social experience of cool than what anyone else may take the term to mean:  he writes, “Cool = an attractive attribute that embodies the existential strains to be independent, enviable, one-of-a-kind, and trailblazing.”  Hmm, except for the words “attractive” and “enviable” this definition could fit the Unabomber.  These two words then reveal that it’s all about what other people think.  The whole enterprise of “Hipster Christianity,” from this book’s perspective, feels like it’s about those who are trying to “one up” other people, to be in on something before anyone else is, to have people notice you, etc. and making their faith “cool” is part of this process.  Bro, these are SCENESTERS!  They’re followers of whatever is elusive (wearing a t-shirt that says, “I’m so indie, I’m into music even I haven’t heard of yet.”).  He even comes out and says that “cool is basically a perception of others—it can’t exist as anything intrinsic or detached from public perception.”  SAYS YOU!

I would argue that coolness is something like a combination of good taste, non-conformity and self-possession—it doesn’t matter if people think you have good taste or not (do YOU know why you like it?), or whether you are not-conforming to something which the majority of people reject or approve (you’re simply not willing to follow a trend just because others are—you think for yourself), and you don’t get flustered by others judgments or assessments of you (e.g. “I still like Coldplay…I don’t care if you think they’re corporate label Radiohead rip-offs”).  Was Jesus cool in this sense?  Absolutely.  Can Christians be cool?  Yeppers.  So can atheists, Sufi Muslims, Trekkies, sportos and motor heads, geeks, sluts, bloods, wastoids, dweebies, and dickheads.

The metaphors for “cool” this book uses feel so off to me as to be referencing the opposite of what it claims–those who are so caught up in TRYING to be cool that there’s no way they could actually BE COOL:  “ahead of the pack,” “the road less travelled,” “survival of the hippest,” “the pursuit of individuality,” “affirmation through attention.”  In the author’s mind (and perhaps, experience), cool is a social phenomenon.  You’re not cool unless other people think you are cool and you have to struggle somehow to maintain cool or you could possibly become uncool.  And this is one of his central objections to “Hipster Christianity,” that somehow Christians are going to try so hard to be cool that they are going to eventually align Christianity with the pursuit of cool or get stuck in some old “trend” (“HIP” PASTOR:  “Hey micro-brewery night on Sunday!” POST-“HIPSTER CHRISTIAN”: “Micro-brews are so 2 months ago, I’m bailing on this whole Christianity thing”).

Man, if we need a book called “Hipster Christianity” then we also need some social analysis and critique of “Dork Christianity” or “Lemming Christianity” or “Sentimental Christianity” or any other number of phenomena that you can see in the church today.  Turning the microscope on guys with lumberjack beards isn’t really that insightful if they are just cut from the same old imitative cloth that every other era of Christianity has had—just write about people who have no internal sense of the good, the true, and the beautiful.  But it’s making my boy Elijah and I and people whom we truly consider “cool” look bad cause we DO like Sufjan and N.T. Wright and Wes Anderson and all of the things associated with these trend-stalking scenesters.  To be honest, I want to make a t-shirt that says, “If you have to write a book, you wouldn’t understand.”

All this to say, I suppose, that while this author’s critique may fit some bills, I’d prefer if he didn’t label my friends and I according to his little scheme, photo shoots & quizzes.

One last thing:  I remembered seeing an association of “hipster” with “Christian” in the liner notes of a Belle & Sebastian album from 2000 (a tell-tale sign of my “hipness”)…I reproduce it here as a more positive association of these terms: 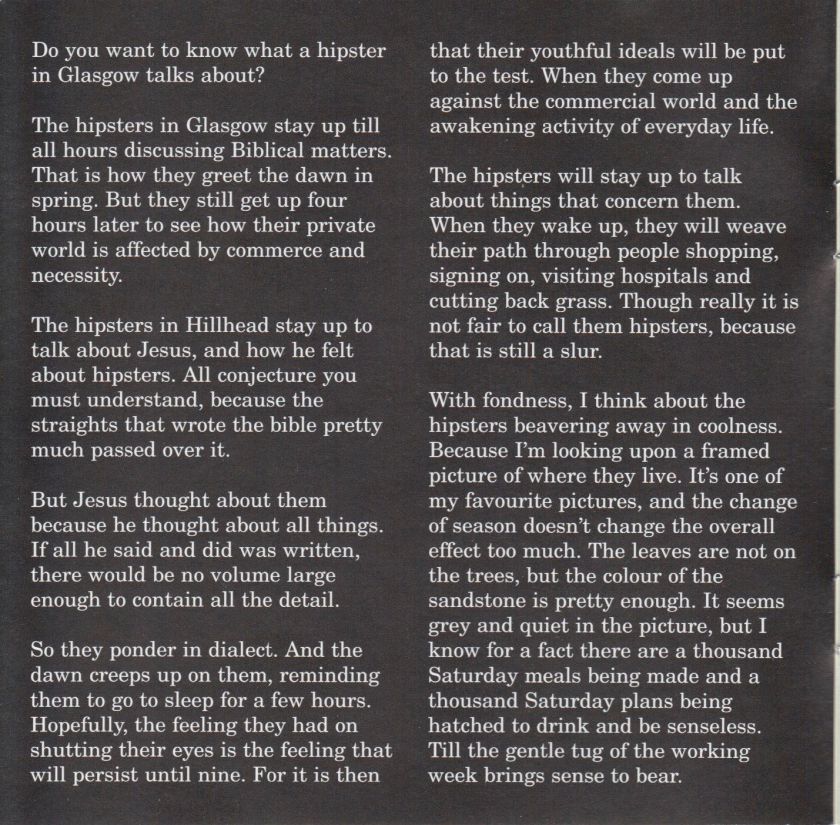 Another update:  My friend, Matt Barber, pointed me to a review of “Hipster Christianity” by philosopher James K.A. Smith that is along the lines of what I’ve pointed out above, except that it is a well-formed argument, written by a prolific published author, and doesn’t sound quite as bitchy.