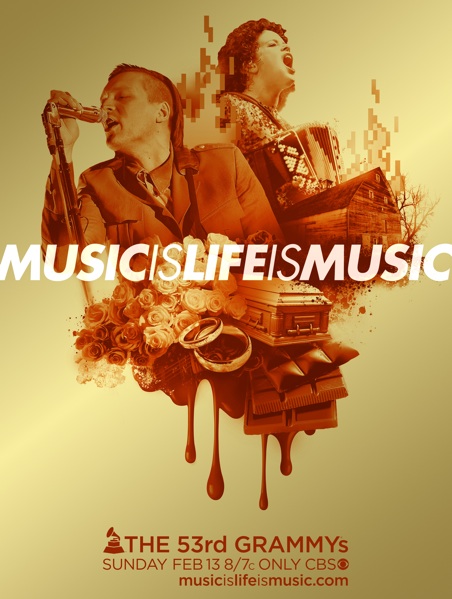 By now this is old news, but we’ll just say I was very busy on St Valentine’s Day (I had a date with Karl Barth).  Arcade Fire’s album The Suburbs, which Greg and I placed at numbers three and six in our respective Best Albums of 2010 lists, won Album of the Year at the 53rd Grammy Awards, one of the record industry’s highest honours.  Arcade Fire beat out industrial giants Eminem, Lady Antebellum, Lady Gaga and Katy Perry (I’m so tempted to just write ‘Lady Eminem, Lady Antebellum, Lady Gaga and Lady Perry’…) to take their seven little gramophone trophies home.

The indie blogosphere (as well as some very interesting backlash from those who had never heard of Arcade Fire before the 53rd Grammy Awards) has been set ablaze by the news, with the A.V. Club’s Steven Hyden writing,

Who cares about the Grammys?  It’s probably the least respected of all the major entertainment awards—which means it’s in the running for least respected institution anywhere—and yet a lot of people are going to be attaching a lot of significance to Arcade Fire winning album of the year honors for The Suburbs Sunday night. […] Does this signify the full-scale “arrival” of indie rock at the center of mainstream music?  Has Arcade Fire officially taken over the mantle as this generation’s defining rock band?  Does this mean that “we” won?  Be prepared to read all kinds of ruminations on these questions and many more in the days ahead.

It’s not my goal to have any groundbreaking things to say about this award, but I do think it’s interesting to point out that The Suburb‘s record sales were not what we may consider modest.  They reached number 1 on several international charts, including album charts in Belgium (Vlaanderen), their ‘native’ Canada, Ireland, Norway, Portugal, the UK and America (Billboard 200).  In recent history, several independent records have been performing well on the charts (namely Radiohead’s In Rainbows, Vampire Weekend’s Contra and The Decemberists The King is Dead), which gives some hope to those wishing to provide an affirmative answer to the question, ‘Does this mean that [the independent music scene] won?’

But the reality is that at the end of the day Arcade Fire and these other independent bands are selling a lot less music than the other nominees for Album of the Year (Lady Gaga’s The Fame Monster went platinum in 11 countries, eight of which were multi-platinum, and diamond in Poland), which does seem to indicate that the ‘war’ between independent and the mainstream is far from over.  But record sales are not the driving force behind independent music, which exists largely in reaction against the massive record industry.  There is no war, and as Arcade Fire bandleader and singer Win Butler said in his acceptance speech before the band performed ‘Ready to Start’, ‘We’re going to play another song because we like music.’  Arcade Fire won Album of the Year at the Grammys – that’s wonderful!  I’m sure that this will inspire more people to invest in their music, which is a great thing.  But in the end, music is about what we like and dare I say, what we love, which has absolutely nothing to do with Grammy Awards.

Here’s a brief Q & A time with the band after the show (via Tom Breihan at Pitchfork):

One thought on “Has Arcade Fire taken over the world? No, but that was never the plan.”