As is obvious from several posts (mainly from Greg), we here at LITC are huge fans of the musical emanation of the trashy Texan Josh T. Pearson.  Only two years ago Greg happened upon Pearson’s 2001 album (as a member of the band Lift to Experience), The Texas-Jerusalem Crossroads.  Soon thereafter the Band Evangelist passed the Gospel of JTP to his disciple Elijah and Crossroads became a mainstay for us two Pearson late-bloomers.  But we’ve determined to never fall behind again!

March marked the release of Pearson’s first record since Crossroads, The Last of the Country Gentlemen (which Greg was evangelising leading up to its release).

On 25 March 2011, Pearson’s ‘Last of the Country Gentlemen Tour’ made its way through Glasgow.  Fortunately for us here at LITC, we were in Glasgow at the time.  In fact, we had booked our tickets well in advance and Greg had travelled thousands of miles from America to meet Elijah at his home in Scotland for a week of adventure leading up to the gig. 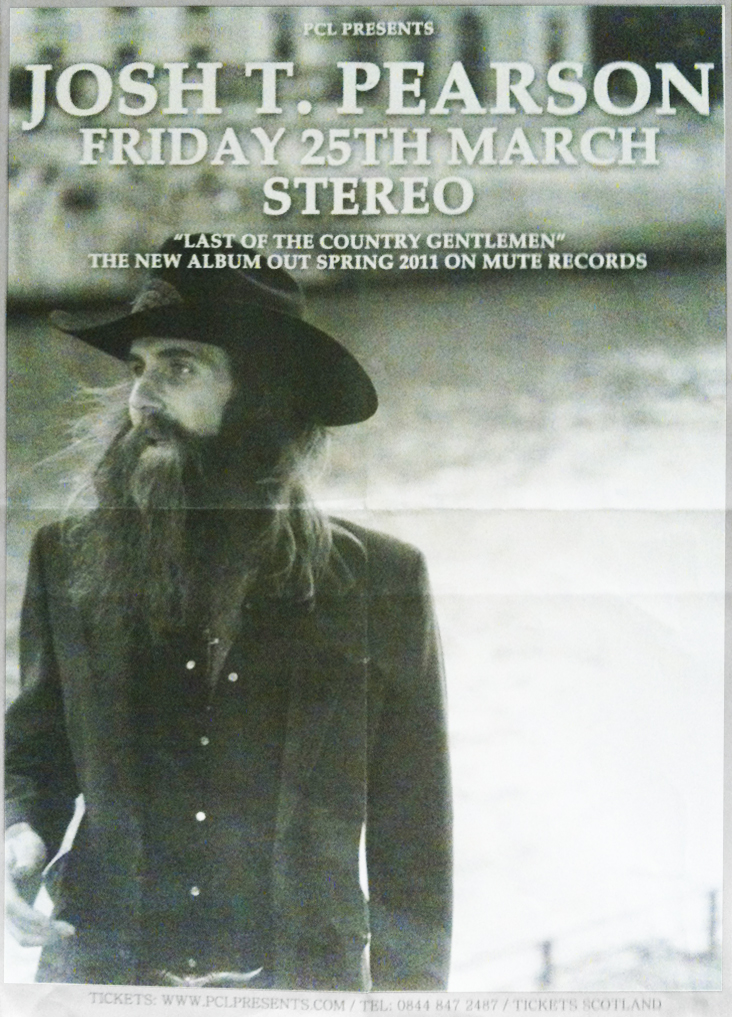 Greg got his hands on this advert from Stereo

At the show Pearson was selling an eleven-track live CD (seven of which are actual songs, while the rest are exclusively stage banter, all on a classy Imation-brand CD-R with a carefully photocopied portrait of Pearson, shown below), To Hull and Back. 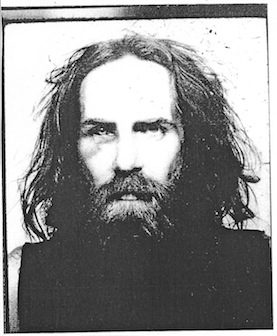 (This isn’t shoddy cropping on our part – it came at that angle, cut this way.)

The show’s opener, a British solo act whose name will remain unmentioned here, was dreadful:  faux Americana, interminable roots/’blues’ compositions with lyrics that tried to conjure up images of railroad tracks and the devil at crossroads and all manner of rough & tumble, down-on-their-luck outlaw clichés.  Let us just say that it was ultimately a Bizarro World version of Josh T. Pearson…

The sick taste of that experience was immediately washed away when Pearson shambled onto the small stage in Stereo’s basement, looking like a heartbroken Jesus on methadone and whiskey, nodding and uttering a low ‘How y’all doin’?’  When a local yelled out, ‘Welcome back, Josh!’ Pearson replied, ‘I hope your years were better than mine…’  During his sound check, he told the audience that they’d need to ‘be super quiet or they’re going to go upstairs [to the restaurant]’ which he reinforced during the show by stopping a song in the middle when some idiots started to talk and only resuming when there was absolute silence.  Though this may seem like pedantry, Pearson’s songs often fell to a bare whisper and light strum, so an absolutely quiet environment was the only way we would actually be able to hear the songs as they were meant to be experienced.

Pearson began his set with what he said was a cover of a song by Boney M (we’d never heard of them, but apparently they were a reggae/disco group from the late 70s put together by Frank Farian, who would later go on to create Milli Vanilli), but Pearson made the song beautifully his own.  At the last second, Greg took out his iPhone and recorded the song, ‘Rivers of Babylon’ onto the voice memos app—here is a link to the recording, which turned out surprisingly polished:

In this song, Pearson sang, ‘Let the words of my mouth and the meditations of my heart be acceptable in your eyes tonight’ as he gazed up soulfully.  It was as if he was dedicating the set to God, offering the pain and brokenness and loss that his songs contained not ultimately to us, the concertgoers, but to a divine audience.  Many of his songs speak about God or Jesus:  in ‘Country Dumb,’ he says that his kind of people are ‘failures each and every one, we’re the kind who will always need a savior’ and and in ‘Sweetheart, I Ain’t Your Christ,’ he sings to his woman: ‘you don’t need a lover or a friend, you need a God and not a mortal man.  Woman, you need born again, again–you need a savior and I just am not him.’  Yet many of his songs also speak of his own inability to control outbursts of anger or drinking (‘Woman, When I’ve Raised Hell’) or rein in his adulterous desire (‘Honeymoon Is Great, I Wish You Were Her’).  Pearson is the quintessential sinner looking for redemption while laying drunk in the gutter–if only more Christians could see their own moral failure and need for salvation as clearly as he does…

During his performance, despite several awkward false starts in reaction to the audience’s noise level (space which was occupied with Pearson telling some pretty wretched jokes), Pearson proved incredibly moving.  Indeed, his lengthy and intensely personal tunes demanded the full attention of the audience.  We here at LITC have come to the consensus that Pearson’s performance was in fact the best solo performance we had ever seen (at one point, I [Greg] even found myself choking up and with watery eyes in a mixture of joy and sadness at the beauty and despair of his set).  You really ought to pick up his record from your local record store and catch him live if he ever comes your way.

6 thoughts on “A review of Josh T. Pearson live in Glasgow”